Have Your Cake and Eat It Too 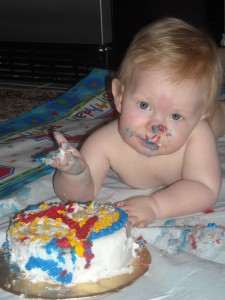 “Do nothing out of selfish ambition or vain conceit, but in humility consider others better than yourselves.” Philippians 2:3 NIV

Child development specialists say children start out selfish and must be taught to share with others. Stand in a room with a group of playing toddlers and you will almost always hear the word “mine” emphasized with a push or a shove. Each child wants what the other one has, not necessarily to play with it, but just to have it. Too often, parents fall into the trap of buying duplicate “stuff” for their kids so nobody has to share…it’s just easier and more peaceful that way. Unfortunately, those children grow up thinking, “it’s all about ME”. They want their cake and eat it too. Somehow, the world doesn’t always work that way and sooner or later, that attitude leads to disappointments and failures.

It’s easy for me to say my kids learned to share. The truth of the matter is they had to because there were four of them and we didn’t have a lot of money. At some point in their lives, they all shared a bedroom with one or more siblings before getting rooms of their own. I was grateful for the invention of bunk beds and trundles! One day Drew asked me if he’d have to sleep on a bunk bed in heaven!

Despite forced sharing, we definitely had moments when selfishness precipitated knock-down-drag-out fights. The most memorable one was when Gwen and Shannon got into it during their adolescent years and Gwen had to go to junior high with a split lip after her younger sister Shannon punched her.

Beyond their tiffs and complaints, I’m convinced being in close proximity all those years, sharing spaces, toys and clothes, taught each of our children the values of compromise and selflessness.

God’s Word teaches us to put others first. For the selfish, that seems like naive folly. But in the eyes of our heavenly Father, He isn’t asking us to do anything He hasn’t already done first. He put us first when He allowed His Son to suffer and die on a cross, all for the forgiveness of our sins.

PRAYER: Heavenly Father, remove from me any selfishness that might keep me from seeing and doing Your will. May You be glorified as I serve You by serving others. In Jesus’ Name, Amen.