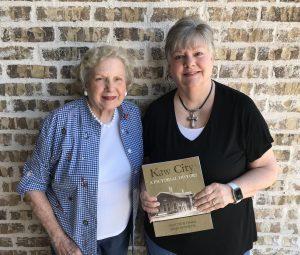 Former Ponca City residents Susan Rutledge and her mother, Annette Cline Pittman timed the release of their new book, Kaw City – A Pictorial History, to coincide with Kaw City Museum’s Annual Reunion on Sunday, May 26 in Kaw City , Oklahoma. Annette and her late husband Bob Cline, both born and raised in the Kaw City that is now covered by the waters of Kaw Lake, spent years collecting and copying vintage photographs loaned or donated to them by long-time Kaw City residents. Their goal was to preserve the history of the little town they grew up in.

Great-grandchildren recently joined the project, spending countless hours digitizing the images, while the mother-daughter team organized them and documented known details such as dates, names and locations. The result is a book filled with copies of 200 photographs, most complete with historical details dating back to the 1800s.

The book is available in paperback from amazon.com.