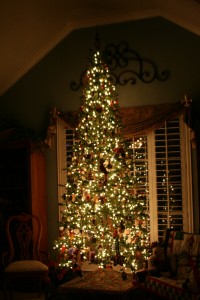 I’ve heard the Christmas story since I was a little child – how an angel came to Mary and told her she was going to have a baby…and Joseph got brought into it and the two of them ended up going to Bethlehem for the census – and it was time for the baby to be born.

I know how exciting it can be to KNOW God has told you something, and begin to watch it unfold. But in my wildest dreams I can’t imagine what Mary and Joseph must have been thinking. They were getting ready to be parents to the Son of God! That’s a lot of pressure to put on newlyweds.

When the shepherds and the wise men came, it must have been confirmation Jesus really was who they’d been told He would be. As He began to grow, can you imagine what it must have been like to watch His every move, His first steps, His first words, and wonder when they would see a sign – some indication He was different?

Maybe there were signs, but the Bible doesn’t talk much about His childhood. We know He grew in wisdom and He KNEW the scriptures. But as each passing year went by, do you think Mary and Joseph began to wonder if they’d heard right?

In those days, people were considered an adult much earlier than they are today. Sometimes they married in their early teens. So 30 years was a long time for Mary and Joseph to wait to see their son fulfill His destiny.

Most of us don’t LIKE to wait. We tap our foot in front of the microwave, or complain because our internet connection takes 5 seconds instead of 3. We are impatient. If I’m in a slow line at the grocery store, you know what I do? I change lines. When the car in front of me is driving too slow, I go around them. If the drive-through line at Whataburger is too long, I go to Arby’s. I don’t like to wait.

Maybe God has spoken something to your heart, and you’ve been waiting and waiting but nothing’s happened…at least nothing you can see. This side of heaven, we don’t see the pieces of the puzzle God is moving to orchestrate  what He’s promised you He’ll do. Or maybe you haven’t heard ANYTHING and that can even be HARDER, because you don’t have something concrete to hang on to…like a conversation with an angel. That doesn’t mean God isn’t working His will and His way for your life. Because if you’re His child, He is.

Faith is confidence in what we hope for and assurance about what we do not see. Mary and Joseph needed faith to walk in obedience and to wait. The end of THEIR story should be an encouragement to US – don’t give up – believe.

There is a cute story about a Kindergarten class and a Christmas performance in a public school. The mom writes she expected to hear songs about Santa and snowmen because the school had stopped referring to the holiday as “Christmas”. And yet the title of her child’s class song was “Christmas Love”. The children were dressed in fuzzy mittens, red sweaters and bright snowcaps. Those in the front row center stage held up large letters one by one, to spell out the title of the song. As the class would sing “C is for Christmas” a child will hold up the letter C. Then, “H is for Happy” and on and on until each child holding up his portion had presented the complete message “Christmas Love”.  The performance was going quite smoothly until it was the turn of a small, quiet girl in the front row to put up her letter. She was the “M” in Christmas. But when she held up her letter, she had it upside down, so it looked like a W. The audience started laughing and the choir teacher tried to signal her to turn it over, but she didn’t realize anyone was laughing at her. She just kept holding up her “W”. Until the last letter was raised, and then a hush came over the audience as they all saw it together. In that instant, they understood the reason they were there, why we celebrate the holiday in the first place…why even in the chaos and busyness of the season, there is a purpose for all these festivities. When the last letter was held high, the message read loud and clear: Christ Was Love.

Jesus not only WAS love, He IS love. And the things He has for you and for me are worth believing in and waiting for. My prayer for each one of us this Christmas is that we learn more how to wait upon Him.