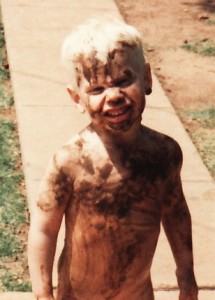 “Fathers, do not embitter your children or they will become discouraged.” Colossians 3:21 NIV

Tree-climbing was one of my kids’ favorite pastimes in the summer. The children spent hours outside playing chase, cops and robbers, cowboys and Indians…all sorts of imaginative games kids play. Towering twenty-year-old trees afforded them a bird’s eye of the neighborhood which added to their enjoyment.

The family dog, Muffy, our long-haired English Cocker followed the children everywhere. She spent so much time outdoors that Grant put two buckets in the back yard so she wouldn’t run out of water and overheat. There was a water spigot by the back fence which made it easy to keep them filled.

One afternoon 3-year-old Drew decided to go for a swim…in one of Muffy’s water buckets. I might never have known, except that the buckets were at the base of our biggest tree where no grass would grow, so there was only dirt on the ground. And dirt plus water equals mud. At least Drew was considerate enough to take his clothes off first…

It must have been quite a show (and lots of fun), because when big sister Becky came banging on the back door to tattle, Drew’s little naked body was covered from head to toe in mud! Becky was expecting me to be angry with Drew for the mess he’d made, but all I could do was laugh. I told him not to move until I could go get a camera. I suppose Becky thought, “if you can’t beat ’em, join ’em”, because by the time I returned with a camera, SHE was naked and painting herself with mud too. It was one of those “Kodak moments” you never want to forget, and to their chagrin, I DO have pictures.

Later, a thorough hosing off was (mostly) all that was needed to clean up the mess…no harm done. Thankfully, I was in the right frame of mind to enjoy my kids instead of blowing up at them.

A child’s curiosity often causes them to try things WE know will make messes. It’s a part of their learning and exploring. When nurtured, curiosity develops creativity. When stifled, it makes children afraid to try new things…ever. Of course monitoring their curiosity can help prevent huge messes, but when the inevitable happens, remember to laugh AND take pictures! Cleaning up a little mud is far easier than mending a broken spirit.

Prayer: God, You have placed tremendous potential for creativity in my children. Guard my words and actions so I don’t inhibit their growth. Give me the patience and self-control I need to guide but never quench their tender spirits. In Jesus’ Name, Amen.