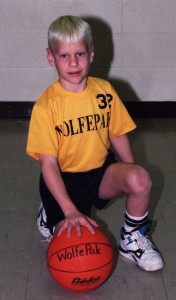 “For I know the plans I have for you,” declares the Lord, “plans to prosper you and not to harm you, plans to give you hope and a future.” Jeremiah 29:11 NIV

I don’t think parents ever find out ALL the things their kids did when they were left home alone, but it is a bit easier when they leave clues behind (or above, as is the case in this story)…

We’d recently moved into our house in Abilene after gutting and remodeling everything from floor to ceiling. It was a fun project the entire family worked on for months. One evening I was sitting in the den reading and noticed something out of the corner of my eye…a huge “blob” on the tallest part of our freshly painted white cathedral ceiling. Suspecting foul play, Grant and I summonsed our four kids for interrogation. At first, nobody was willing to confess or tattle, but after a little coercion (don’t worry, no Geneva Convention rules were broken), we learned the truth. And the truth was better than almost anything any of them could have made up!

5-year-old Drew was the culprit. It started with the Mexican food we’d left with the kids for supper – before Grant and I went out for the evening. Drew looked at the bean burrito in this hands and then up at our high ceiling, and for some random reason, wondered who would be tall enough to scrape beans off the ceiling. Why, it would be his favorite basketball player, Michael Jordan, of course! It’s still not clear exactly how he managed to get the beans to stick to the ceiling…but at least we know why. He wanted to meet “Air Jordan” and this was his plan of action!

A study of the Bible shows how God used extraordinary means to accomplish His plans when He needed to…a talking donkey, a world-wide flood, a human-swallowing fish…the list goes on and on. God has a plan for each of our lives – and it’s a good plan. If you think you can come up with a better one on your own, just remember that’s how Satan deceived Eve. Also, when we follow God’s direction and live by His rules, He doesn’t have to go to great extremes to get our attention…

Many Bible stories make good talking points for teaching about choices and consequences. Help your children understand why they should choose to do the right thing…instead of insisting, “do it because I say so”. Guide them early to seek God’s plan and walk in His will, not because they have to, but because they get to.

Prayer: God, I can think of countless times I’ve forged ahead with my own plans and fallen flat on my face. Your ways are so much better than mine. Help my children desire and seek Your plan for their lives. In Jesus’ Name, Amen.