Falling In the Ocean 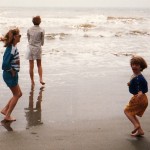 “Our mouths were filled with laughter, our tongues with songs of joy. Then it was said among the nations, ‘The Lord has done great things for them’.” Psalm 126:2 NIV

Texas may get hot in the summer, but in March it can still be a bit chilly. It was spring break and for once, Grant and I decided to actually go somewhere for vacation. We loaded up our four children and headed south, spending nights at my Uncle Don’s house in Houston, but taking day trips to see other parts of near-by south Texas. The kids begged to go to the beach and even with temperatures in the low 70’s, they insisted on wearing shorts. Minutes after we parked the car, their shoes and socks started coming off. Gwen and Shannon “just wanted to get their feet wet”. Famous last words.

Despite our strict warnings, the children continued to venture further into the water…a little at a time. “Please…just up to my ankles,” they promised. But they kept inching deeper until the waves were playfully dancing around their knees. If you know kids, you know where this story is headed.

Becky wasn’t nearly as tall as Gwen and Shannon and yet she kept right up with their knee height. Her culotte shorts were already getting wet. Suddenly, the water surged a little harder than before and it swept Becky right off her feet! At least that’s Becky’s story. But her delighted giggling was less than convincing. Since she was already wet, there was no reason to try to stay dry now…right? What’s a parent to say? Not to be outdone, Drew “accidentally” fell in next, followed by Gwen and Shannon.

We let them swim in the water until their lips literally turned blue from the cold. What fun they had that afternoon! The worst part was getting out. Covered in sand and dripping head to toe, there were no towels, no dry clothes, not even any dry underwear! Fortunately there was a nearby Wal-Mart.

It doesn’t take a lot of money to have fun. We made the mistake of not taking regular vacations when the children were young because we thought we couldn’t afford it. The older they got, the more difficult it was to coordinate their schedules to fit in even short excursions.

Plan simple getaways that let you relax and enjoy one another. The best times can be the unstructured leisure trips where there is no itinerary…no place where you have to be because you paid to go there. Sleep in, play hard and go with the flow…even if it happens to be wet and sandy. Just remember to pack extra clothes for “just in case”.

Prayer: Heavenly Father, thank You for giving us such wonderful children! I treasure the memories of their childhood and the fun things we did together. Help them enjoy their young families and build special memories with them, too. In Jesus’ Name, Amen.