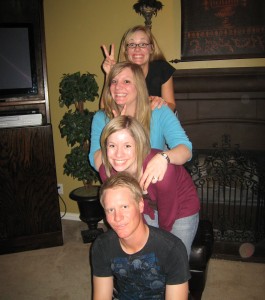 “Don’t grumble against each other.” James 5:9a NIV

I have come up with the guaranteed way to avoid sibling rivalry in your family…don’t have more than one child. What? “Too late”, you say? Well, if that’s the case, don’t sweat it. This too shall pass.

I’ve counseled with many parents who felt like they were failures because their kids fought with each other. They were surprised (and relieved, I think) to discover fighting was actually quite normal. Children aren’t born knowing how to share and get along, it’s a learned process. When you put more than one of them together in a household, they will inevitably “learn on each other”. Growing up, our four kids had plenty of squabbles. They shouted angry words, and even threw a couple of punches that I know about. And yet today, they are the best of friends.

Just because I say it’s normal doesn’t mean we allowed free-for-all’s at our house. We didn’t condone the fighting. In fact, Grant came up with a pretty clever way to squelch their bickering. Any time the kids fought, we would make them stand facing each other, holding hands and staring into each other’s eyes. The “time” always fit the “crime”. The worse the fight, the longer they would have to stand. I remember one incident when Gwen and Shannon had to stare at each other for a full hour. If they stopped or looked away, the time would start over. By the end of the “exercise” they were giggling and finding ways to help each other pass the time…and they were motivated to work harder to get along.

Sibling rivalry has occurred almost since the beginning of time. Abel was killed by his brother, Cain. Joseph was sold into slavery by his brothers. Jacob cheated his brother Esau out of what was rightfully his…these stories may help give us perspective, but they also serve as a warning not to let sibling rivalry run amok. Jesus told us to love God and love one another. As we mediate, that must be our message to our kids…choose to love, not hate.

If you want your children to learn how to get along without fighting, remember to model what you preach. If they see you argue with your spouse or other adults or them…they will grow up thinking that’s the socially acceptable way to solve a problem. It’s not.

Prayer: God, I want my children to learn how to get along with each other so they won’t grumble and fight. Give me the wisdom to teach them how to solve their differences in a loving way. Fill our home with Your peace. In Jesus’ Name, Amen.